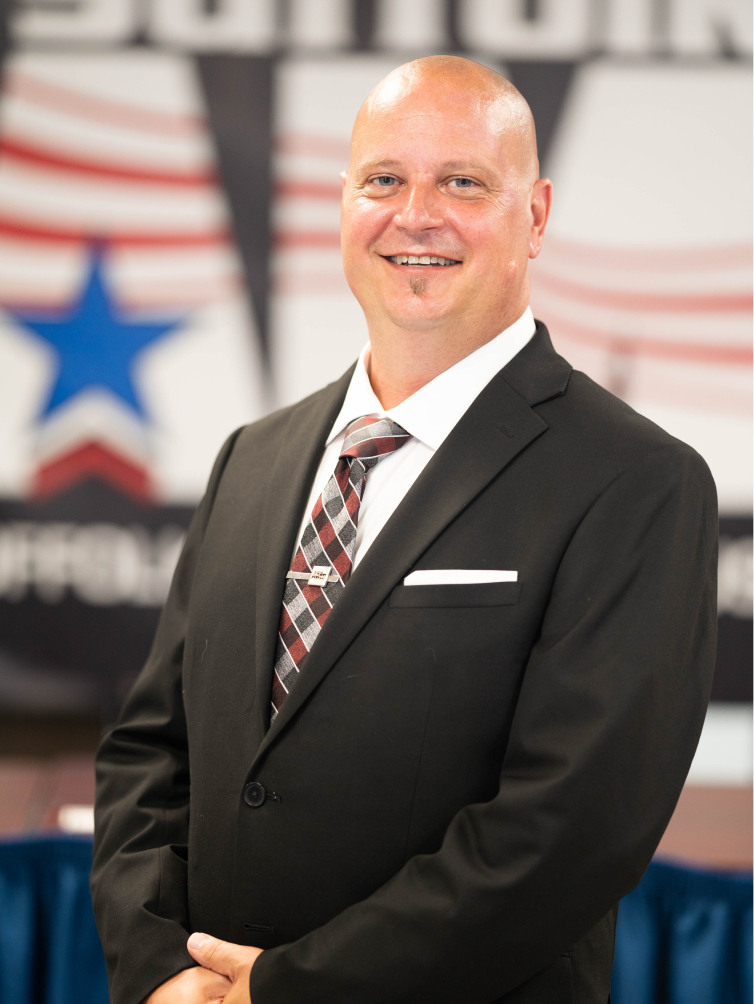 Under the leadership of President Daniel C. Levler and his Executive Board, our Union not only has a seat at every table, but we are looked upon as independent leaders among lawmakers, community leaders, and other Union officials. President Levler was recognized in 2021 by City & State as one of the top labor leaders in New York State as well as one of the top 100 leaders on Long Island. With strong relationships in both parties, he has played a key role in important issues including defeating the Constitutional Convention and passing Proposition 2 which delivers hundreds of millions for Suffolk’s general fund and kept AME jobs during an unprecedented global fiscal crisis.

Our Union is highly engaged with the general public through the Suffolk Matters weekly radio show listened to by thousands each week, Mayday Music Festival, and support for charities that play a critical role in our communities. President Levler was also recently appointed Co-Chair of the New York State Public Employee Conference providing a statewide leadership role. His leadership and proven success are unmatched, and as we embark upon a difficult economic climate, President Levler’s diverse skill set and ability to produce results will see our Union through the storm. 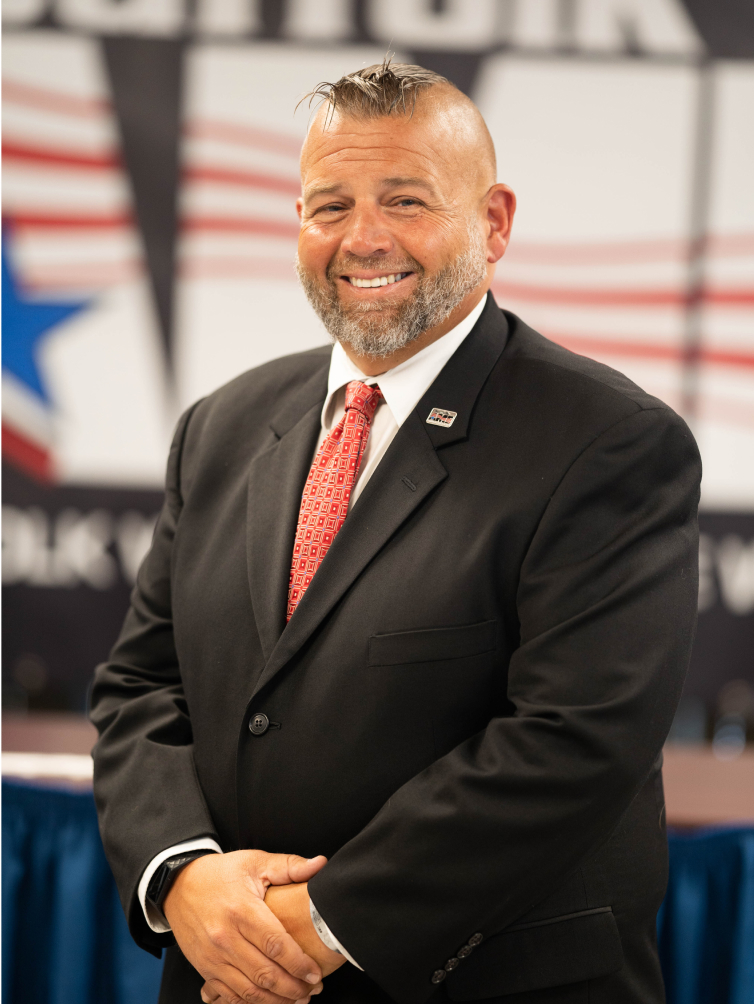 Tom Moran has dedicated more than 26 years serving the public as a 911 Dispatcher with 28 years of experience as a firefighter, including a term as Chief in the North Lindenhurst Fire Department before moving to Holtsville. Tom began serving as the Fire Rescue and Emergency Services FRES Unit president in 2017 and came up onto the Executive Board in 2019.

Tom also serves on the Tuition reimbursement committee, and both the PAC committee and PAC review committee. His extensive experience as a Public Employee, Fire Chief, and volunteer gives him a unique perspective when handling and furthering the mission of AME and he will continue serving our members he has come to know so well over his tenure as a public employee here at AME. 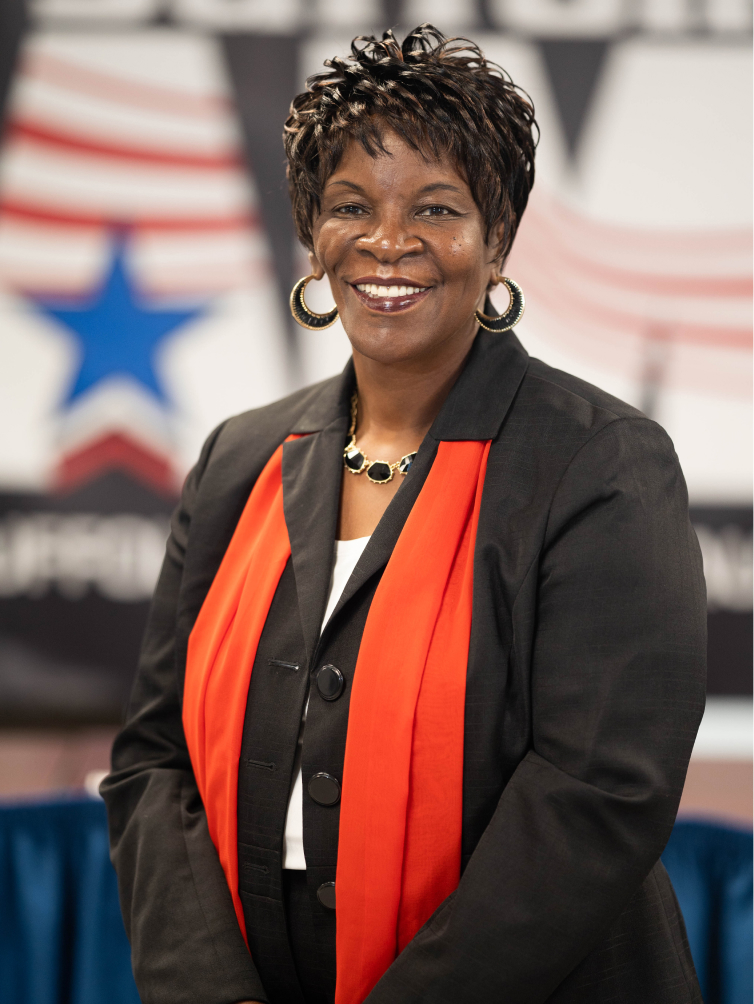 Linda Brown is a lifelong Suffolk County resident who has dedicated her life to serving others both through her Union advocacy and involvement in various groups and organizations locally. She is the Chairperson of the Board of Trustees at her hometown church and a well-known and respected member of her community. Linda has conducted treasurer training for all newly elected unit officers, coordinated retirement training seminars, and also organized educational workshops for AME members. She is also responsible for enforcing timely financial reporting and compliance which is critical to ensuring the successful forward motion of our Union. Linda is also the current Treasurer of the Suffolk County Deferred Compensation Board, and your AME representative on the Suffolk County (401 A) Plan Board. 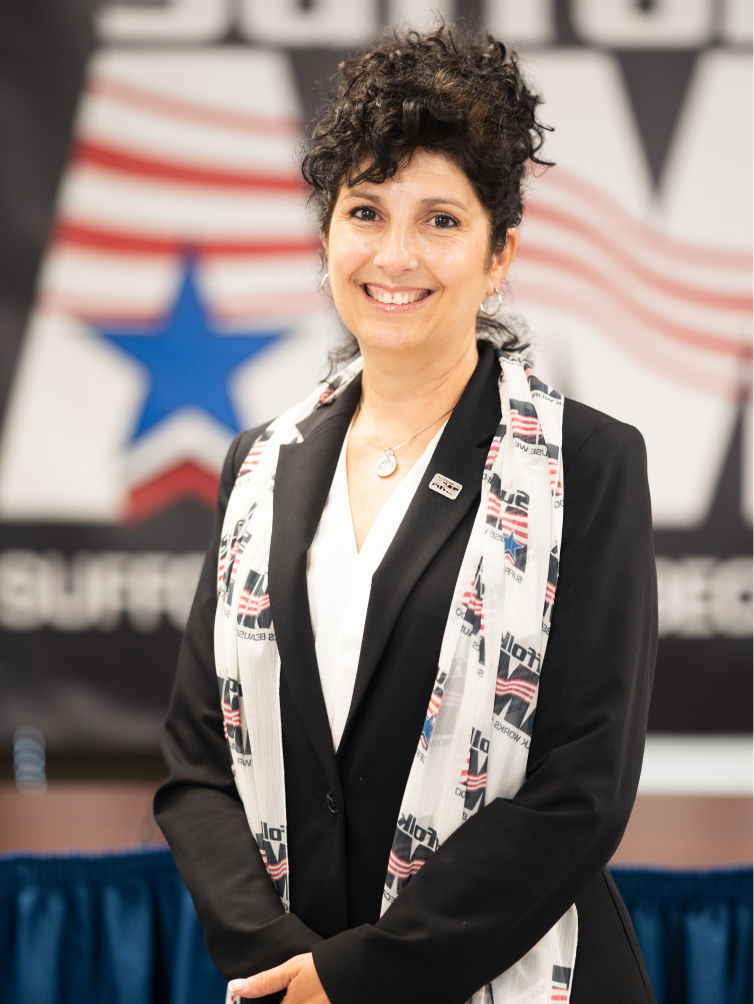 Christina Maher has served AME members as a Vice President and a Trustee on the Suffolk County Municipal Employee Benefit Fund. Christina has years of experience dealing with the complexity of these positions and values the work of others. Her integrity and dependability have served AME members well as she takes her fiduciary responsibility seriously. Christina is a hard worker; as a single mom, she put herself through college to earn her degree in Information Technology, then sought to educate others. Christina also works to explain the Collective Bargaining Agreement to members with questions and she is the liaison to many AME committees. 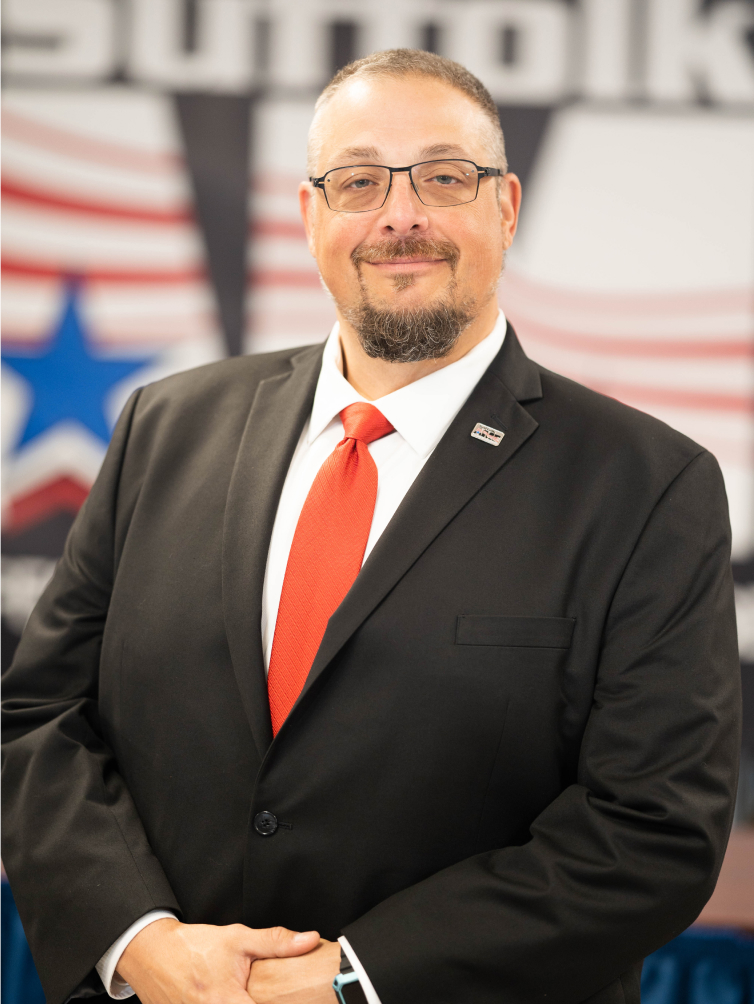 Stanley J Humin III is a devoted husband, father, Suffolk County resident, and staunch Union advocate. Stan was born and raised in a Union household and is now a second-generation Suffolk County Employee. Stan currently serves as your Legislative Director and Recording Secretary for the Association and has represented the Association on many of their key committees. He continues to serve as a trustee on the Labor Directed Suffolk Municipal Employee Benefits Fund. He is also the Executive Board Liaison to the Patient Care and Vector Control units and has faithfully served as a Board of Directors since 2011. 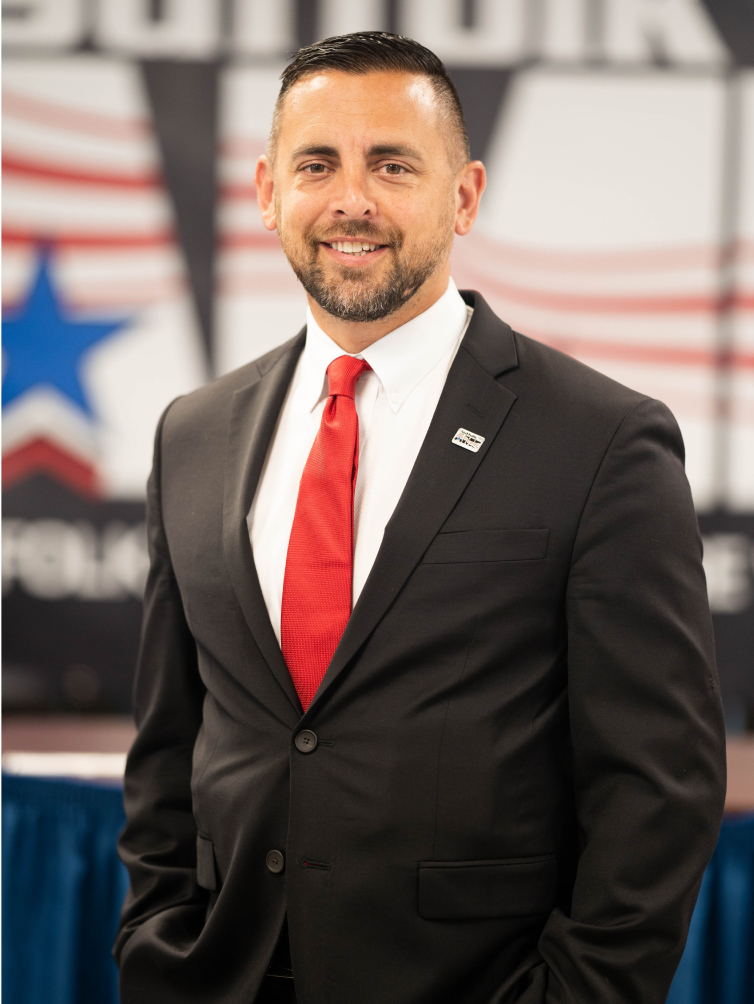 Nicholas DeBello began his career in the Department of Social Services in 2006 and quickly got involved with the Union. He was elected as Unit Secretary in 2008 and eventually became the Unit President. He simultaneously became a delegate and joined a number of committees to further support Suffolk AME and its mission, and he now serves as a Vice President on the AME Executive Board. He has also been heavily involved in developing Suffolk AME’s orientation program that has a high enrollment of eligible members for over 3 years, including adapting the program to be virtual during COVID. Throughout the COVID-19 pandemic, Nick has worked hard to assist members in meaningful ways from securing reasonable accommodations to ensuring that appropriate PPE was provided to all workstations. 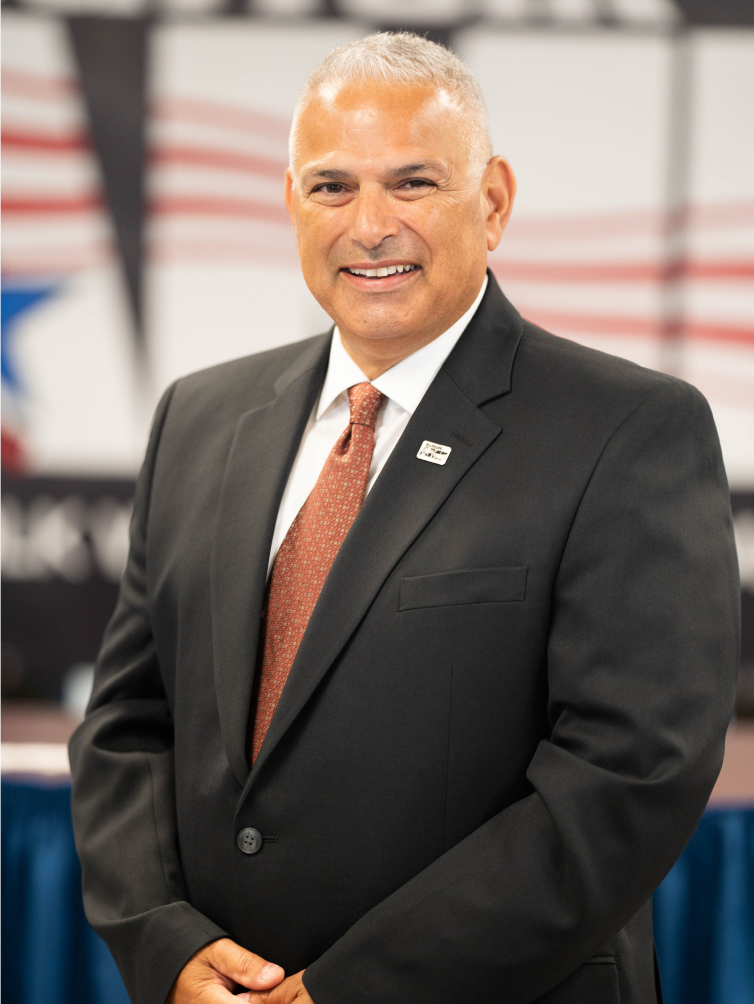 Ben is a lifelong resident of Riverhead, and for more than half of his career, he has been closely involved and supportive of his Union. Ben first served as a shop steward in the Police Civilian Unit, then as a Board VP, and for the last twelve or more years as the Unit’s President. He has recently stepped up and taken on the role of Vice President on the Executive Board where he will continue his dedicated service. When asked why he initially got involved with Suffolk AME, Ben says that initially, it was because when his daughter was young, she was diagnosed with a brain tumor, and required multiple surgeries and medical specialists. Had it not been for the exceptional medical benefits that we have as members, he says they have not been able to provide her with the treatment she needed to overcome her illness. Since then, his support of and involvement with our Union has only grown, and his commitment to fighting for every member is stronger than ever. 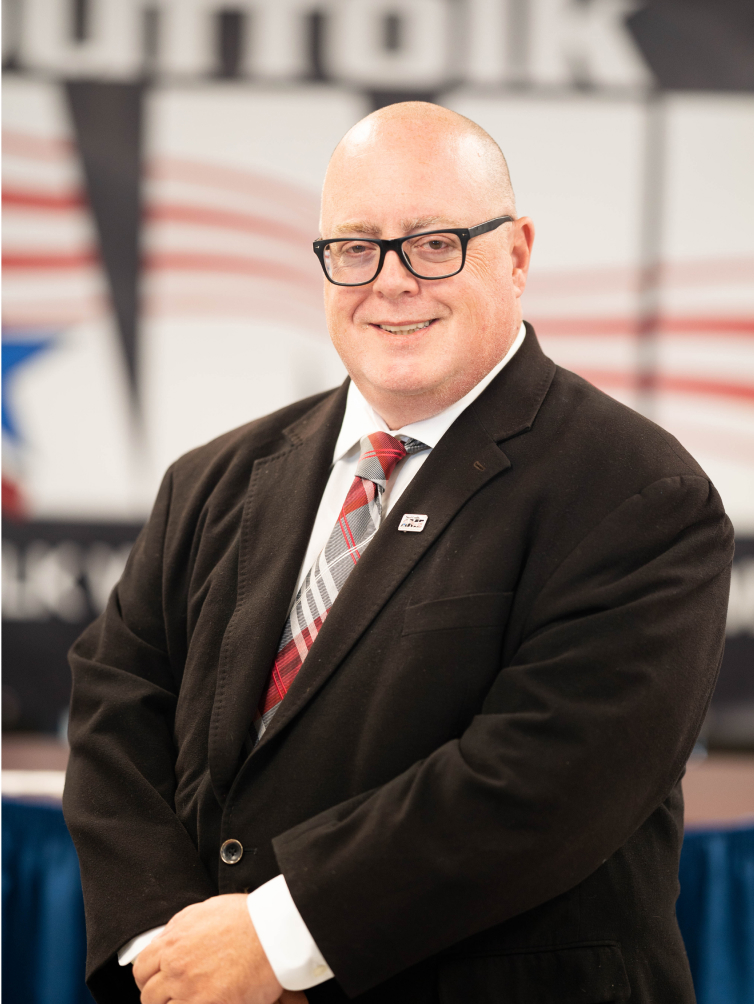 Christian Limbach worked as a Custodian for over three decades and earned his MBA all while caring for his two special needs sons. A dedicated father and labor supporter, Christian has been involved with Union advocacy for many years. He served as Secretary of CSEA Local 870 until he transitioned to his position in Suffolk County at the Office for the Aging. Christian then served as a Unit Delegate from 2011 to 2015, and as Unit Executive Vice President from 2013 until assuming the Unit Presidency in 2014. He was appointed to the Executive Board in 2016, elected in 2018, and has served as both Vice President and Recording Secretary during this time. He takes great pride in the amount of successful, positive outcomes regarding Member disciplinary actions. He also represents Suffolk AME interests as a Member of the Suffolk County Welfare to Work Commission. He was a proud EMT/ Driver with Bay Shore Brightwaters Rescue Ambulance and served honorably in the United States Army.